For the really impatient folks out there (I'm one of you!): yes, MacBook and OS X rocks. 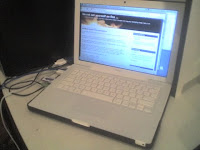 For the rest: After pondering for some time on whether buying a MacBook, a MacBook Pro or a Lenovo Thinkpad (T-Series), I decided to buy a white MacBook.

Why not a MB Pro? The added price (almost 2X) for a dedicated GPU, LED backlit display and illuminated keyboard didn't seem right to me.

Why not a Lenovo T61p? Basically because I'd get nauseated just thinking about booting it up for the first time and be greeted by the dreaded WIndows Vista, knowing that I had actually paid for that. I know there are now versions shipping with SuSE Linux, but I couldn't find any reseller nearby with such models.

So here are the specs and my impressions so far:

Email ThisBlogThis!Share to TwitterShare to FacebookShare to Pinterest
Categories: apple